If you are pregnant with triplets, you may be both overjoyed and overwhelmed anticipating your new arrivals. Triplet pregnancies are exciting, but they present special challenges for everyone involved. Careful monitoring, proper care, and preparation are necessary to ensure that a triplet pregnancy is successful.

Triplet pregnancy is on the rise. The major cause of increased triplet pregnancies is the increasing use of fertility treatments. Drugs that promote ovulation are an important factor. In a normal menstrual cycle, a woman releases only one egg. If that egg is fertilized by a man's sperm, it can become a baby. But, fertility drugs can cause a woman to release more than one egg at a time. If multiple eggs are fertilized at once, the result is multiple babies.

Another cause is in vitro fertilization, in which eggs are fertilized outside the woman's body and then transferred to her uterus. Doctors usually transfer several eggs at a time, to increase the chance that one will implant and develop. Sometimes more than one egg begins developing, resulting in a multiple pregnancy.

A triplet pregnancy may be discovered because the woman's belly is bigger than expected for a given stage in pregnancy or the doctor may notice more than one baby's heartbeat during a prenatal visit. There may not be any very obvious triplet pregnancy symptoms. Most of the time, though, triplets are discovered during routine ultrasound testing on women who have had fertility treatments. Ultrasound is considered the official way of diagnosing a triplet pregnancy.

Being pregnant with triplets means seeing a lot more of your health care provider. Most women will choose to see an obstetrician, preferably one who has experience with multiple pregnancies. There will be frequent prenatal visits, ultrasound exams, and other tests to make sure that the mother is doing well and the babies are developing properly.

If your morning sickness becomes severe, consult your doctor immediately. He will screen you for hyperemesis gravidarum, a treatable condition which is harmful if left untreated. The doctor can prescribe something to ease your symptoms and prevent dehydration.

At some point in your pregnancy, you may be restricted to bed rest. If this occurs, find ways to remain relaxed and fight boredom. It may be easy to feel stressed or frustrated when you are confined to the bed or couch. Yet, it is important to relax physically and mentally for both you and your babies. Here are some tips on how to make the most of your bed rest:

There are many activities that you can participate in during bed rest. If you plan it right, it can be a mini vacation.

When triplets are discovered early in a pregnancy, it's possible that one or more of them will not develop into a baby. Most of these losses happen within the first nine weeks. One study of women who started out with triplets showed that about half of the mothers delivered three babies, one third delivered twins, and 18 percent delivered a single baby. Three percent of the women miscarried.

One of the usual tests for birth defects, the triple screen, doesn't work with triplets. Ultrasound exams can help to reveal some birth defects. The doctor may also recommend amniocentesis or chorionic villus sampling, in which a tiny amount of tissue from the placenta is removed and examined.

Complications in the Mother

Gestational diabetes is another condition that exists exclusively during pregnancy. Women who are carrying multiples appear to have a greater risk of developing this condition. 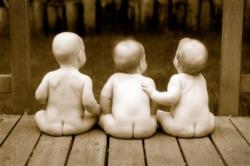 Doctors are still studying the best way to deliver triplets. It's not uncommon to need a c-section because the babies are not positioned properly for a vaginal birth. In other cases, vaginal delivery may be at least as safe as, if not safer than, a c-section.

Vaginal birth of triplets involves a lot of medical care. Each baby needs to be monitored individually during labor. An epidural for the mother is highly recommended, because the delivery is likely to be difficult. The doctor may even need to reach inside the uterus to help position the babies. The woman should be prepared to need a c-section if there is a problem with the vaginal birth.

After the triplets' birth, especially if it was premature, the babies may need to go directly to the neonatal intensive care unit. Premature triplets have similar risks and problems as single or twin babies who are premature, and tend to do about as well.

Another postpartum consideration is the increased possibility of depression in the mother. Johns Hopkins Bloomberg School of Public Health reports that women who deliver multiples are 43 percent more likely to have postpartum depression.

Bringing the babies home is a memorable moment for parents of triplets. Many do not get to experience this joyous occasion right away. In many cases, parents can expect to have at least one baby having an extended stay in the hospital. With support from professionals, family, and friends, the new additions to the family should settle in to the home within a few months.

Finding accurate information on the Internet about triplet births can be difficult. Many web sites relate personal stories, which can be helpful but won't apply to every case.

It is exciting to be pregnant with triplets. Be sure to record your pregnancy in a diary, memory book, scrapbook or photo album. Years later, you and your three children can look at photos and enjoy reading about at your special journey.

0
Comments
© 2006-2020 LoveToKnow, Corp., except where otherwise noted. All Rights Reserved.
Resources, Advice & Tips for Covid-19
Read More
What to Expect During a Triplet Pregnancy