The symptoms of an enlarged uterus vary according to the cause of the condition. Learn about common signs of enlargement as well as symptoms specific to some of these medical conditions.

If you have an enlarged uterus, you may display some common symptoms.

Abdominal pain can be a sign that the uterus is enlarged, but the discomfort can also be a sign of many other conditions. Pain in the lower abdomen might be from the enlarged uterus itself or because it presses against other organs.

Pressure against the bladder by a bigger than normal uterus can lead to another symptom of uterine enlargement - urinary incontinence. Other bladder pressure symptoms include a persistent urge to urinate (urinary urgency) and running to the bathroom more frequently to pass urine (urinary frequency).

Bloating and Other Pains

An enlarged uterus can lead to noticeable abdominal bloating, excess gas, and constipation. Other painful symptoms might be present, including:

Some conditions that cause enlargement of the uterus, such as uterine fibroids, can lead to heavy menstrual periods. The excessive blood loss can cause anemia, leading to fatigue. Other menstrual cycle problems related to an enlarged uterus include:

If the uterus is enlarged enough to extend into the upper abdomen, it can restrict movement of the diaphragm. Taking a deep breath might become difficult and can cause a woman to feel short of breath.

An enlarged uterus can cause infertility and also lead to significant pregnancy problems, such as premature delivery and miscarriages, among other complications. Women who have difficulty conceiving along with other symptoms of enlargement of the uterus should talk to their doctors about diagnosis and treatment options. 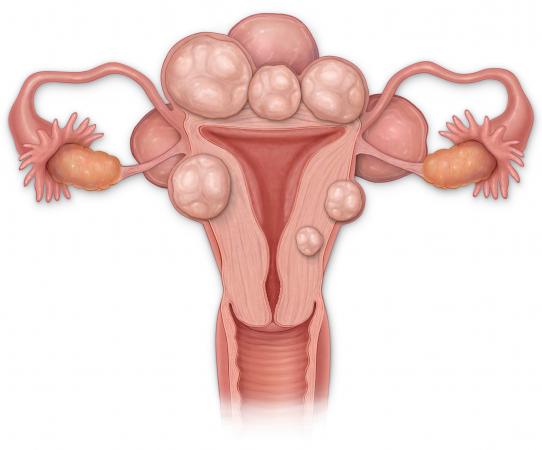 Symptoms of an enlarged uterus can differ according to the specific cause of the condition and some of these conditions might require medical attention. The following are some of the medical problems that can cause the uterus to enlarge and lead to symptoms associated with uterine enlargement.

Adenomyosis occurs when parts of the inner lining of the uterus (the endometrium) grows into the organ's muscular wall (the myometrium). Symptoms associated with this condition include:

Uterine fibroids are the most common cause of an enlarged uterus. They are benign growths in the muscular wall of the uterus. Some can project into the uterine cavity or from the outer surface of the uterus. Symptoms related to this condition include:

Severity of the symptoms depends on the size of the fibroids.

If the cause of the enlarged uterus results in irregular ovulation, cysts, which are fluid-filled sacs, can develop in the ovaries. This can increase the symptoms caused by the uterine enlargement. These cysts can disappear on their own but in some cases they grow and may become serious. Ovarian cysts can rupture if not treated and cause severe problems including:

Uterine cancer can cause the uterus to enlarge. This cancer can also cause difficulty passing urine, irregular vaginal bleeding not associated with menstrual cycle, and pain during sex.

An enlarged uterus is also associated with a molar pregnancy, or gestational trophoblastic disease (GTD). A molar pregnancy results from abnormal development of cells in the early embryo. The pregnancy is not a true pregnancy - some moles have only placenta-like tissue and others have an abnormal fetus containing abnormal chromosomes.

Recognizing the symptoms of an enlarged uterus can lead to proper diagnosis and treatment. Women experiencing a cluster of symptoms can benefit from discussing the problem with their doctors.