A pregnancy ultrasound, sometimes called a sonogram, is used to visualize the inside of the body without invading it. Ultrasounds are used during pregnancy to look at the growing baby, the mother's uterus and other organs, and to monitor health and development.

An ultrasound machine emits sound waves, as noted by the American Pregnancy Association. These waves bounce off the baby and the mother; the machine uses the data from the bouncing waves to create an image of the structures. The picture is displayed on a video screen and can be captured in a printout or as a video output.

Getting a Pregnancy Ultrasound

Getting an ultrasound during pregnancy is painless and straight-forward. Generally for a pregnancy ultrasound, you will be asked to lie on an exam table. Then, the doctor, nurse, or ultrasound technician will put a smooth, clear gel on your abdomen. This helps the ultrasound to get a better image. Once you are ready, the person performing the ultrasound will move an ultrasound transducer, also known as a wand or a probe, over your stomach. You will feel the wand moving around, but there is no pressure and it is not uncomfortable. In all likelihood, you will be so excited to see the image of your baby on the ultrasound monitor that you may not even notice the wand. In some instances, you may need a transvaginal ultrasound where the transducer is placed inside of the vagina in order to get a clear view of the fetus.

Ultrasounds do not emit radiation and are believed to be completely safe for mother and child with no known risks. Despite this, most medical professionals recommend not having more ultrasounds than are deemed necessary for regular monitoring of your pregnancy.

Why Pregnant Women Get Ultrasounds

A pregnancy ultrasound is a non-invasive way to monitor the growth and health of your growing baby. Some medical professionals routinely use ultrasounds as a tool during regular checkups. Other OB care providers prefer to use ultrasounds only if a problem is suspected. If your doctor, nurse, or midwife is scheduling an ultrasound, feel free to ask whether it is routine or whether they are looking for something in particular.

Some of the things your doctor can see from an ultrasound during your first trimester include, according to the March of Dimes, include:

Later in your pregnancy, ultrasounds may disclose:

Ultrasounds are also used when amniocentesis is performed to help the doctor guide the needle during the procedure, as noted by WebMD. They are also used to check for some birth defects and to diagnose vaginal bleeding and other complications during pregnancy.

While a pregnancy ultrasound cannot identify every possible problem with a baby's development, they are incredibly useful in diagnosing many conditions as well as in reassuring everyone that baby is growing normally. 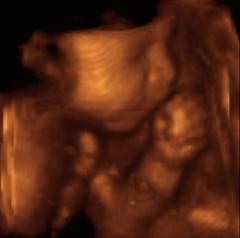 During your first trimester, your baby may look like little more than a peanut to you. Rest assured that your healthcare providers can tell a lot by this tiny image. Ask them to point out the outline of your baby for you and to show you your baby's beating heart.

Comments
© 2006-2021 LoveToKnow, Corp., except where otherwise noted. All Rights Reserved.
Why Pregnancy Ultrasounds Are So Important