It is not unusual to experience rashes or skin changes during pregnancy. However, a rash should always be reported to your doctor as certain rashes can be indicative of a more dangerous condition for both mom and baby.

Pregnancy changes a woman's body and your skin can be affected as well. Many of these changes and conditions are normal due to hormone changes from the pregnancy. Your skin may even become more sensitive to detergents or soaps. You may also experience dryness and/or itchiness on your belly. This is due to the stretching of your skin from the rapid expansion of your belly that occurs to accommodate your growing baby. A few other common skin conditions include:

When you are pregnant, it is easy to get overheated as you progress further in the pregnancy and especially during the summer months. Heat rash and friction rash are common conditions that cause irritation and discomfort during pregnancy. To combat the problem:

Stretch marks are another common skin condition that occurs during pregnancy. They are jagged lines on the stretched skin of the abdomen. Stretch marks may also be found on the breasts, buttocks and thighs. These marks may appear purple, red or pink but will fade to skin tone or lighter with time. Using a stretch mark cream may help with both itching and appearance. 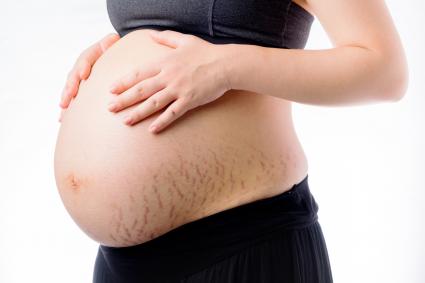 Melasma, also called the "mask" of pregnancy, is another rash-like condition where splotchy dark patches may appear on your face. This is due to an increase in pigmentation caused from pregnancy hormones.

Linea nigra, a line that runs from the belly button down to the pubic region, may also look like a rash at first. This occurs due to pregnancy hormones as well. 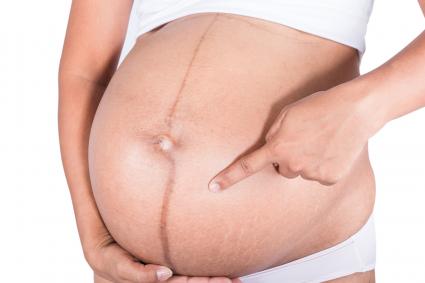 You may experience itching and/or a rash on your hands during pregnancy. This could be due to a number of different factors such as, hives from an allergic reaction, or you could have a PUPPP rash which is common. However, the itching and rash could indicate a more serious condition such as the pregnancy-induced liver condition called intrahepatic cholestasis. If you have a rash or extreme itching especially on the palms of your hands, you should discuss this immediately with your doctor.

PUPPP (or PUPPS) is technically called pruritic urticarial papules and plagues of pregnancy. It is a red itchy rash that usually occurs in the third trimester of pregnancy. It commonly begins in the abdomen and gradually travels to the back, buttocks, and extremities. Often, relief is given in the form of topical anti-itch creams, like cortisones, and antihistamines.

No adverse reactions have been observed in regards to the developing baby. If you have the rash in one pregnancy, it does not raise your chances of having it in another. The rash and itching will subside and disappear after the birth of the baby, usually within a few weeks.

The rash tends to develop in the stretch marks during pregnancy and is thought to be a possible inflammatory reaction to the stretching of the skin from damage to the connective tissue. However, the exact cause of this rash is still unknown. 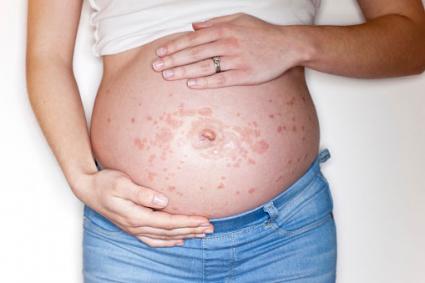 While PUPPP rash may be one of the most commonly known pregnancy rashes, there are others out there. While most are simply uncomfortable for the mom-to-be, there are several rashes that can cause complications for the developing baby, both in utero and after birth.

Prurigo gestationis occurs in the latter half of pregnancy. Small, itchy bumps appear on the hands, feet, arms and legs. Prurigo gestationis may be uncomfortable, but causes no harm to the mother or baby. When the pregnancy ends, typically the condition will end as well. The origin of this condition is unknown, but it is thought that women who have preexisting atopic dermatitis (eczema) have an increased chance of getting this rash.

Pemphigoid gestationis appears to be an autoimmune disorder that causes an itchy rash with blistering lesions. Merck cites that approximately 25 percent of women with the problem will be subject to reoccurrence and 5 percent of fetuses will be affected (have the rash or lesions). It often worsens near or after the birth, and can take several months to be resolved. Pemphigoid gestationis was previously called herpes gestationis because the rash looked similar to herpes simplex rash, however, it is not connected to or caused by the herpes virus.

Cholestasis of pregnancy is a liver condition that occurs during pregnancy and causes intense itching for the mother, which may result in a rash. The palms of the hands and bottoms of the feet are especially affected. Symptoms similar to jaundice, like yellow eyes or skin, are also clues to the diagnosis.

Risks to the mother are small. She will have irritated skin until delivery, at which point the condition usually subsides. However, her risk for having the condition again is raised to around 70 percent according to MayoClinic.com. Pre-term birth and meconium are both risks to the unborn child. Even fetal death can occur but is rare. For these reasons, an induced labor may be the best course of action in order to prevent an unfavorable outcome.

Women suffering from intrahepatic cholestasis of pregnancy may find comfort by joining the ICP Community Support Group online. There, they can learn more about the condition and discuss remedies and fears with other women who have been diagnosed with the problem.

Most of the rashes discussed can be treated with an over-the-counter (OTC) medication. From calamine lotion to hydrocortisone creams to antihistamines, your doctor will recommend the best drug for your particular condition and symptoms. Even commonly used OTC drugs can have adverse side effects for a developing baby, so be sure to check with your physician before using anything.

0
Comments
© 2006-2021 LoveToKnow, Corp., except where otherwise noted. All Rights Reserved.
PUPPP and Other Pregnancy Rashes and Treaments