You may be concerned because you just found out you're pregnant, but you're not experiencing any pregnancy symptoms. Being pregnant without symptoms is not typically a cause for concern when you are early in your pregnancy. Keep in mind that every pregnancy is different and the intensity and frequency of your symptoms can vary as well.

Is It Normal to Have a Positive Pregnancy Test But No Symptoms?

Can you be pregnant without symptoms? If you are not experiencing symptoms of pregnancy after a positive pregnancy test, it may simply be too early. In general, most women start to feel symptoms around five to six weeks gestational age and according to one study, the majority of women (nearly 90%) will feel symptoms by the end of the eighth week.

Is Being Pregnant With No Symptoms Common?

It is quite common to not experience any symptoms for the first month or two. However, if you wait about two weeks after your first home pregnancy test and still have no pregnancy symptoms, you may want to take another test or contact your doctor. Though it's rare, you may have had a false positive reading on your pregnancy test or you also may have miscarried without realizing it. According to the March of Dimes, about 10 to 15% of pregnancies result in a miscarriage. 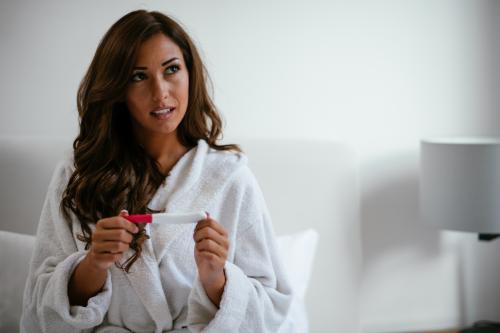 Is It Possible Not to Know You're Pregnant Until Delivery?

There is the rare chance you can be pregnant and not realize it until you go into labor. Approximately 1 in 2,500 women don't know they are pregnant until they go into labor. A few reasons a woman may experience no signs of pregnancy include:

When to Be Concerned

The first sign that makes many women suspect they're pregnant is missing their period. However, many women have implantation bleeding around the time of their period. Usually the bleeding is very light and only lasts a day or two. If this is different from your regular period and you've had unprotected sex or are trying to get pregnant, you should take a pregnancy test.

Your breasts may become more sensitive during the first trimester, similar to how they might feel right before you get your period. However, many woman who drink plenty of water and avoid caffeine have no breast tenderness in general and may not experience this symptom early in the pregnancy.

You may have a more heightened sense of smell when you're pregnant which can be attributed to pregnancy hormones, in this case specifically estrogen. These smells can also trigger nausea and morning sickness. Being sensitive to smells can easily be overlooked as a pregnancy symptom.

You may have a specific reaction to certain foods. The foods that you once loved no longer sound appetizing. Or, you may crave foods that you normally dislike. You may not make the connection that these could be pregnancy symptoms and just assume you may or may not have a taste for certain foods.

You may notice more bathroom stops. This symptom usually pops up around six weeks. However, if you normally drink a lot of fluids (which you should be doing regardless), you may not notice this symptom since you're already spending a lot of time in the bathroom.

You will probably feel tired or fatigued in the first trimester, but if you're already tired from taking care of other children or busy at work, you may not notice a difference.

Many women experience nausea and vomiting in early pregnancy. Despite the name, this can happen at any time. Regardless of what all the television programs, movies, and novels say, many women do not experience morning sickness. You may also mistake it for a stomach bug or stomach upset from something you ate.

You Can Have a Healthy, Normal Pregnancy

0
Comments
© 2006-2021 LoveToKnow, Corp., except where otherwise noted. All Rights Reserved.
Why Don't I Have any Pregnancy Symptoms?