Some women develop high blood pressure, or hypertension, in pregnancy. The cause of this condition is not always clear; however, if left untreated, it can lead to serious health problems for both mother and baby.

What Is High Blood Pressure During Pregnancy?

One theory is that gestational hypertension is an abnormal reaction to the increase in blood volume during pregnancy. Normally, the blood vessels dilate in order to accommodate the increase, but sometimes this process doesn't happen correctly. A moderate rise in pressure isn't harmful, but a severe rise can be dangerous. An average blood pressure is about 120/70 and doctors generally aren't too concerned if the bottom number, or the diastolic measurement, increases by only 10-15 points. However, if a woman already has a higher-than-average blood pressure, a moderate rise might mean that her numbers become worrisome.

A blood pressure measurement is part of every prenatal visit. Hypertension in pregnancy may damage the way the placenta functions, making it work harder to transfer oxygen and nutrients to the fetus. This can cause the baby to become malnourished and grow more slowly than usual. This process is called intra uterine growth restriction (IUGR).

High blood pressure is also associated with placental abruption, which is a very serious condition where the placenta detaches from the uterus before the birth of the baby. Women with high blood pressure might need medication to keep their blood pressure levels within the safety range, but doctors can prescribe medicines that can be safely used during pregnancy.

Sometimes hypertension in pregnancy is part of a different syndrome that used to be called toxemia but is now generally referred to as preeclampsia. Preeclampsia is a combination of wide-ranging symptoms. Often, it is a very mild condition but other times it can be life-threatening. One of the primary purposes of prenatal care is to identify women with preeclampsia so she can receive treatment before becoming dangerously ill.

There are three symptoms historically used to identify the preeclampsia, according to WebMD:

Of course, we know most women experience some degree of swelling during pregnancy. If the swelling is only in the feet or ankles, and if it is gone in the morning after a night's sleep, it is probably normal edema. Some women will also occasionally have a trace of protein in their urine and many will have a slight rise in blood pressure in the last month of pregnancy. This makes it harder to tell if they are experiencing the onset of mild preeclampsia, so a doctor or midwife may schedule extra prenatal visits to monitor conditions more closely. She will probably order a blood test to look for changes that are often seen in preeclampsia, such as a rise or fall in hematocrit and a change in liver function.

Mild preeclampsia probably only needs to be watched. A woman will usually reach full term with no harm to her or her baby. But if the condition changes, or if it starts to affect the health of mother or baby, intervention or treatment is needed. If the baby is pre-term and the mother is stable, treatments for preeclampsia include:

If the pregnancy is at 37 weeks or more or if the mother is developing severe preeclampsia with other problems like breathing or vision problems, the treatment is the delivery of the baby. The doctors will compare the benefit of waiting for greater fetal maturity against the risk that the preeclampsia may worsen to a dangerous state of eclampsia. Labor may be induced or the baby may be delivered by Cesarean or c-section. This decision is best made in consultation with a perinatologist. 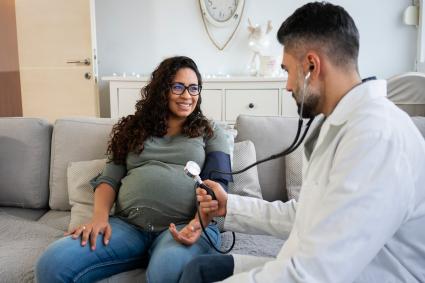 On average, five to eight percent of pregnant women in the United States have some signs of preeclampsia. A small percentage of women with preeclampsia--ranging from 1 out of 100 to 1 out of 200--may continue to progress all the way to eclampsia. As you can see, eclampsia itself is rare, but it is such an extremely dangerous condition for both the mother and the baby that every possible effort to be made to prevent preeclampsia from developing into eclampsia.

Eclampsia is characterized by new convulsions or seizures during pregnancy or right after birth. It is thought to be caused by cerebral irritation, probably as the result of abnormal blood flow in the brain because of high blood pressure. Women with eclampsia go into extreme seizures and may lapse into a coma. They also may stop breathing, have kidney problems, and the placenta may abrupt. The baby may die, and--in severe cases--the mother may die, too.

After eclampsia, the mother may have permanent brain damage after the seizures. The mother may also be at risk for developing eclampsia with future pregnancies.

Fortunately, women in developed counties have access to medical care so preeclampsia is generally detected and successfully treated--thus preventing eclampsia. Eclamptic convulsions are now, fortunately, extremely rare. Prevention of these conditions by regular prenatal care is very important for healthy outcomes for both mother and child.