If you have been actively trying for pregnancy with no success, you may begin to worry about your fertility. There are a number of ways to determine if you are actually infertile and consulting with your doctor is the first step.

Women who do not get pregnant quickly often wonder if they are infertile. Although friends and family members may have tale upon tale of unplanned pregnancies or know many people who got pregnant on their first try, the reality is that it often takes time to conceive a baby.

Questions to Ask Yourself

The average time to conceive varies for every couple. Generally, specialists do not consider a couple to be infertile until they have been trying for at least a year if they are under 35 years of age, or if they have been trying for six months and are over 35 years of age. Yet, length of time is not the only indicator that you might be infertile. When wondering, "Am I infertile?" ask yourself the following questions:

If the answer was "no" to the first question or "yes" to any of the other questions, there's a chance you may be infertile. It would be in your best interest to have fertility tests run sooner than later.

Answers on Your Own

Undergoing fertility testing can be expensive, time consuming, and stressful. Before putting yourself and your partner through the pressure of clinical tests, try doing a little research on your own. One way for women to do this is by using a fertility monitor. It helps keep track of hormonal changes (the luteinizing hormone and estrogen) in your body, letting you know when a woman is most fertile. If you never get a peak reading, it may indicate you have fertility problems. 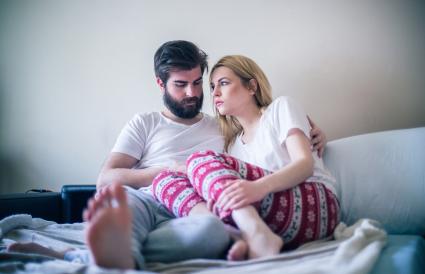 Finding the answer to the difficult question of infertility can sometimes prove to be a challenging journey. Your doctor will help determine the best route of testing based upon your medical history.

In fact, some couples do not end up with a definite answer and are diagnosed with unexplained infertility. But before they get to that point, a barrage of testing is done to determine if they can get pregnant. Reasons for infertility involve a myriad of factors, so be prepared to take a lot of tests. Often, your doctor will recommend an evaluation by a specialist at a fertility clinic. Infertility can be caused by such things as a previous chlamydia diagnosis or steroid use, so be up front with your reproductive specialists when they ask you screening questions. Women can be expected to go through a number of tests that might include:

Testing is performed through various methods to determine whether there are hormonal imbalances or ovulation issues that could be causing infertility.

An ultrasound may be performed to check the uterus and ovaries for fibroids, cysts or other issues that could be causing fertility problems. The endometrial lining will also be assessed.

A laparoscopic surgery is an outpatient surgical procedure where doctors evaluate uterus, ovaries and fallopian tubes to look for blockages, ruptures, cysts, or other medical problems that could be causing infertility.

A hysteroscopy is an outpatient surgical procedure. It is performed to check for abnormalities in the uterus and cervix using a hysteroscope which is a thin, lighted tube that is inserted vaginally.

A small sample of tissue is taken from the endometrium to see if it is healthy and undergoing the needed changes for possible implantation of the embryo. The endometrial biopsy will also determine if there are any abnormalities of the endometrium such an infection or inflammation.

Men should be taking charge of their fertility as well. After all, men contribute to infertility approximately one-third of the time which is the same as women. The remaining third is unknown or a combination of male and female infertility issues.

Testing that men may encounter is usually in the form of semen analysis. Men will be asked to give one or two samples of semen, which is then tested for several factors. Not only does the sperm count matter, but so does their movement and their shape. Men's hormonal levels can also be tested via blood work. Further testing, such as genetics, may be indicated after the semen analysis to check for male fertility problems. Your physician will let you know if additional testing is necessary.

It Is Important to Get Answers

Questioning your fertility is not uncommon especially if it has been several months and you do not have that positive pregnancy test in hand. If you have a reason to believe that infertility might be the problem, schedule an appointment with your doctor to discuss testing. The sooner a potential problem is diagnosed, the sooner it can be treated.

2
Comments
© 2006-2021 LoveToKnow, Corp., except where otherwise noted. All Rights Reserved.
Resources, Advice & Tips for Covid-19
Read More
How Do I Know if I Am Infertile?