If you are not getting pregnant despite having sex without a condom, there are several factors that might be the cause. On the other hand, if you choose not to use a condom but want to avoid pregnancy, learn about what you can do to protect yourself.

Unprotected Sex and Unable to Get Pregnant

Consider the following possible factors that could explain why you are not conceiving although you are not using a condom.

Timing of sex is (almost) everything when it comes to fertilizing an egg each menstrual cycle. If you don't have intercourse when you are most fertile in your cycle, you have little or no chance of conceiving.

Based on a study published in 1995 in the New England Journal of Medicine (NEJM):

For women with the average 28-day cycles, and ovulation on day 14, the fertile window is around days nine to fourteen. You can use a simple menstrual cycle chart to keep track of cycles and record the days you have intercourse.

A Problem With Ovulation

Ovulation dysfunction is a common cause of difficulty getting pregnant. You likely have a problem with egg production and ovulation if the length of your menstrual cycles are irregular, or shorter or longer than the average range of 21 to 45 days. You will have difficulty timing sex if you can't tell when you are ovulating - or even if you are ovulating at all.

According to a National Center for Biotechnology Information (NCBI) book, there are several causes of dysfunction of ovulating. An evaluation by your doctor or a fertility specialist can identify your cause. A specialist can also review symptoms and signs of ovulation you can track each cycle. You can also use an ovulation calculator to help you estimate when in your cycle you ovulate

Don't assume your inability to conceive lies with you. Fifty percent of the time, the cause of the problem getting pregnant rests with the male partner. A semen analysis is the essential test to begin to investigate your partner's fertility.

Tubal and Other Factors

Problems with your fallopian tubes interfere with the ability of the egg and sperm to get together. Damage to or closure of the tubes can result from sexually transmitted disease (STI), endometriosis, or pelvic/abdominal surgery.

Tubal factors account for 35 percent of the causes of inability to conceive, based on a patient guide book by the American Society for Reproductive Medicine. Other factors include problems with the uterus and cervix, such as scarring or birth defects.

If you are older than age 30, you will find it harder to get pregnant. According to an American Society of Reproductive Medicine handbook (page 4), pregnancy rates fall off when a woman is in her 30s and especially after age 35.

The decline in fertility with age is a result of fewer and lower quality eggs remaining in the aging ovaries. The following are useful statistics on the effect of age on the chance of getting pregnant each cycle:

Not every woman will get pregnant in the first month of unprotected intercourse. For couples with no known infertility factors, a 2003 review in the British Medical Journal states the following statistics:

Infertility is defined as one year of trying without conception. However, consult your doctor after six months if you are age 35 or older, or sooner if you have an obvious problem, such as irregular menstrual cycles or a history of STIs.

Chances of Pregnancy Without Using a Condom

You may wonder what the chances are of getting pregnant without a condom. This would depend on multiple factors such as:

In general, since you have a six day fertility window, your chances of getting pregnant without using a condom are around 20 percent. This risk may be higher or lower depending on other various factors and circumstances. However, it has been reported that the chance of pregnancy increases to around 30 percent if you do not use a condom when you are at the highest risk of getting pregnant which is two days before ovulation.

Avoiding Pregnancy if You Don't Use a Condom 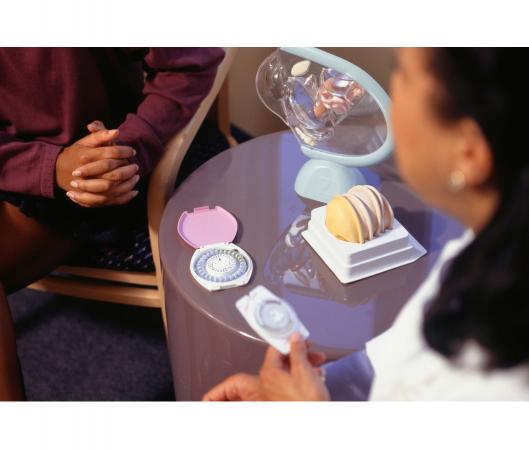 Perhaps you choose to have sex without a condom, but you don't want to get pregnant. If you are looking for ways to not get pregnant, you have other options for avoiding it.

There are several effective methods of birth control, although, unlike condoms, none of them will protect you from STIs. They range from female barriers like a diaphragm or hormonal birth control like the pill, to convenient, long-acting options like an intrauterine device (IUD). Your doctor will help you decide which choice is best for you given your lifestyle and preferences.

Natural family planning methods help you narrow down the days you are most fertile so you can avoid unprotected sex on those days. The following facts are helpful to know when to not to have sex to avoid pregnancy.

Comments
© 2006-2021 LoveToKnow, Corp., except where otherwise noted. All Rights Reserved.
Having Sex Without a Condom and Not Getting Pregnant