A small amount of bleeding is a common cause of brown vaginal discharge in early pregnancy and may be no cause for worry. This sometimes happens because of the normal effects of the embryo or the changes in your hormones on the lining of your uterus. The brown mucus discharge during pregnancy could also be a sign of a complication with your fetus or conditions of the cervix, such as infection or cancer.

Do a pregnancy test if you don't get your normal period one to two weeks later.

Bleeding at the Time of Expected Period

If you are wondering whether brown spotting is a sign of pregnancy, you should know that brown discharge at the time your next period is due can also be an early sign of pregnancy. Small fluctuations in your estrogen and progesterone hormones at that point could be the cause of the brown discharge. You could also have pinkish or reddish discharge. You might not realize you are pregnant until your normal menstrual bleeding doesn't start.

You can have a brown discharge or obvious bleeding if you have a nonviable intrauterine fetus, one of the complications of early pregnancy. When the fetus stops developing, HCG and progesterone production fall, and your uterine lining breaks down and bleeds.

The brown discharge or bleeding often starts close to the time the next period is due or in the following weeks. It depends on when the fetus becomes nonviable. One type of nonviable fetus is a chemical pregnancy, in which case the brown discharge could start at the time of implantation.

A brown discharge starting anytime in early pregnancy can be a sign of an ectopic pregnancy. This is an abnormal pregnancy where the fetus implants outside the uterus. It is important to know:

If you have ongoing, irregular brown or red discharge and one-sided pelvic pain, see your doctor whether or not you already know you are pregnant.

Early miscarriage symptoms include vaginal bleeding and pain. The bleeding might start as a brown discharge and become heavier, bright red blood. Be aware that:

See your doctor if you know or suspect you are pregnant and have brown discharge or bleeding with crampy pelvic pain for more than two days.

Cervical ectropion (eversion) is a normal, physiologic condition that can cause you to have a brownish, or pinkish mucus discharge or blood. It means the glands lining the inner canal of your cervix (the endocervix) turn inside out to face the vagina and therefore bleed easier. Bleeding can start as early two weeks after conception.

The ectropion is more common in pregnancy because of higher estrogen production starting in the first week after conception. Cervical inflammation or intercourse can increase the chance of bleeding and brown discharge from this type of cervix.

A sexually transmitted infection (STI), of the cervix, such as by chlamydia or gonorrhea, can cause a brown vaginal discharge due to bleeding. The infected cervix bleeds more easily in pregnancy and could be the reason for any brown or bloody discharge you see. If the infection gets into the uterus, this could also be a source of bleeding.

An underlying cervical inflammation, or vaginal infection that inflames the vagina or cervix, can cause brown spotting, especially after intercourse. In addition, brown discharge could also be from the effect of infectious organisms on the color of your cervical or vaginal mucus.

Cancer of the Cervix 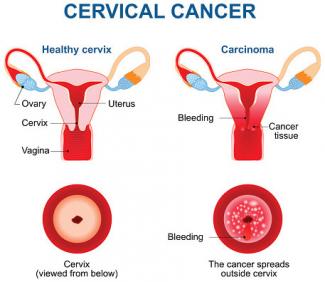 A previously undiagnosed cancer of the cervix could start bleeding in early pregnancy. You cannot tell if your brown discharge is due to cervical cancer or one of the above conditions without a medical evaluation. This might include a Pap smear, a colposcopy, and a cervical biopsy to make the diagnosis.

Although cervical cancer is not common in pregnancy, it is the most frequently diagnosed cancer during pregnancy. It is important to make an early diagnosis and decide on options for treatment and your pregnancy.

When to Seek Help

If you are pregnant, or suspect you might be, and you notice brown discharge or other signs of vaginal bleeding, consult your doctor. This is more important if:

If you are unsure you are pregnant and have a brown discharge, go see your doctor for a pregnancy test or start with doing one at home.

A brown stringy discharge in early pregnancy can be an indication of either a benign or a worrisome condition. Don't hesitate to go for an evaluation to ease your mind or make an early diagnosis of a pregnancy complication.