Baby conception using Chinese calendar systems is not an unheard of practice. Many modern women living in Western society have tried this method when it comes to conceiving a little one of their gender preference, whether or not they usually buy into old wives tales. If you are trying to improve your chances of conceiving a girl or a boy, Chinese calendar systems will surely be something you hear about either from friends and family or internet message boards before your pregnancy is through.

What Is the Chinese Conception Chart? 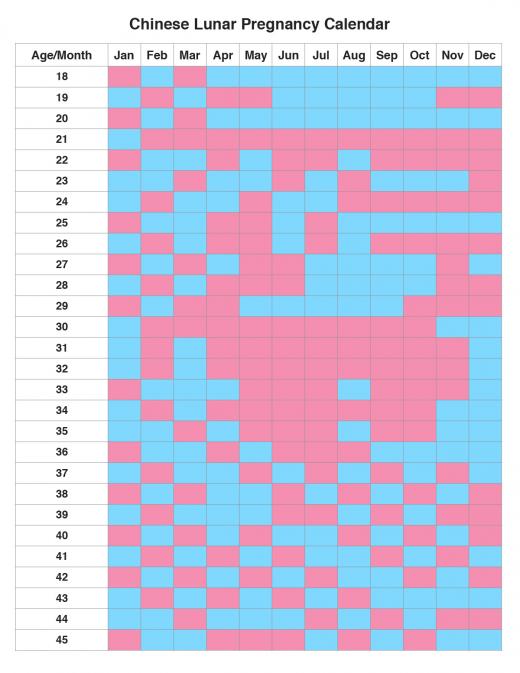 As any good superstition would have it, the Chinese Gender Chart - also known as a Chinese Conception Chart - was found in an ancient tomb of royal regard, having been buried over 700 years ago. The original is currently showcased at the Beijing Institute of Science in China.

While no one has ever officially declared it to be an exact science, plenty of women swear by it, thanks to its accuracy in regards to their personal pregnancy. Popular word on the street is baby conception using Chinese calendars is up to 90 percent accurate, but again this is all hearsay. Even though using conception calendars to influence gender seems to be a gamble, you'll definitely come across plenty of die hard believers as you await that all-telling ultrasound.

The chart contains blue and pink boxes, with the months of the year across the top and a series of numbers down the side, starting with 18 and ending with 45. The months signify the month of conception, and the number column represents the age of the mother at time of conception. To determine your baby's gender:

Since the Chinese Conception Calendar claims to be able to predict baby gender, many women use it before conceiving, rather than utilizing it after the fact. If it is your first child, you may use it just for fun. However, if you are holding out for a specific gender in regards to the future last addition to your family, you may be using it as extra assurance for your determination game plan.

While it may not be 100 percent accurate, using this method can be a fun way to guess your baby's gender. Whether you are wondering how to conceive a boy with the Chinese calendar or a girl, the tips above will help. Try this technique with your spouse or friends to find out if you may be having a boy or girl!

Comments
© 2006-2021 LoveToKnow, Corp., except where otherwise noted. All Rights Reserved.
Using the Chinese Calendar to Conceive a Boy or a Girl