Many antibiotics are safe to take throughout pregnancy and have minimal risks to cause birth defects or other problems to a fetus. Some are safe to use only in certain trimesters because of the risk of poor fetal outcomes. A few antibiotics are known to be unsafe for the fetus and should be avoided unless there are no other alternatives.

How Safety Is Determined

Antibiotics have been used safely in pregnancy for years and are essential because an untreated infection puts baby and mother at risk. Few drugs are approved for use during pregnancies by the United States Food and Drug Administration (FDA). However, antibiotics, like other medicines, are rated by the FDA by pregnancy risk categories.

In a 2011 Commitee Opinion, the American Congress of Obstetricians and Gynecologists (ACOG) reaffirmed the safety of several antibiotics commonly prescribed during pregnancy. Other antibiotics have uncertain safety and others pose known risks to a fetus. These conclusions are based on:

Because of liability issues, investigators are reluctant to do basic science studies of antibiotics and other drugs in pregnant women.

ACOG considers the following antibiotics safe for use in pregnancy:

According to a 2008 Global Library of Women's Medicine (GLOWN) review, these antibiotics are graded as pregnancy risk categories B or C, which means: 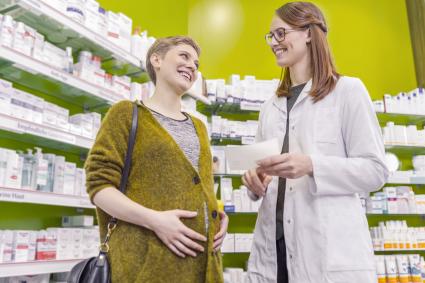 ACOG's opinion is that the safety of nitrofurantoin and sulfanomides in pregnancy is uncertain, so they should be taken only when necessary. A large study of women who were asked to recall what antibiotics they had taken during pregnancy was published in JAMA Pediatrics in 2009. The study raised controversy because it found an increased risk of birth defects in babies whose mothers took nitrofurantoin and sulfanomides.

According to the 2011 ACOG Commitee Opinion, the study had several limitatons that did not make it possible to draw the definitive conclusions that the study author did. Based on the fact that other studies have shown an association with birth defects and others have not, ACOG concluded that the data on the safety of nitrofurantoin and sulfonomides is unclear. Importantly, a more recent large study of Norwegian women, published in 2013 in Obstetrics and Gynecology, showed no increased risk of birth defects with nitrofurantoin.

Any medicine is more likely to affect a fetus during the critical time of rapid cell division and growth during the first eight weeks, and the early formation of organ systems during the first trimester. Some antibiotics affect a baby mainly in the first and third trimesters, while others exert their effect throughout pregnancy.

According to a 2009 review in the journal Obstetrics and Gynecology, the following antibiotics are known to affect a baby if taken during pregnancy and are rated pregnancy risk category D, meaning there is evidence of risks to a human fetus.

Of note, sulfonomides interfere with bile metabolism and transport in the newborn liver. If taken near birth, they may cause neonatal jaundice.

Use Caution With All Medications

Do not take any prescription or nonprescription medicines, including herbal preparations, during pregnancy without your doctor or midwife's advice. For the safety of your baby, avoid any antibiotics or other medicines, especially during the first trimester, unless necessary for you or your baby.

0
Comments
© 2006-2020 LoveToKnow, Corp., except where otherwise noted. All Rights Reserved.
Resources, Advice & Tips for Covid-19
Read More
Which Antibiotics Are Safe During Pregnancy?