Pain associated with ovulation usually starts just a few days before the egg is released from the ovary. The pain might increase at the time the egg ovulates, then fade quickly. Some women will continue to have mild symptoms up to their next period.

In general, you can expect to ovulate about one to two days after your mid-cycle pain starts. A study published in 1980 in the British Medical Journal found 91 percent of the study women had one-sided pain 24 to 48 hours before ultrasound evidence of ovulation. When does ovulation pain occur? For some women and for some cycles, pre-ovulation pain might start a few days earlier than that.

You may be wondering, how long does ovulation pain last? It can vary, but may include multiple parts of your cycle. According to MedlinePlus, the pain around ovulation - known as mittelschmerz ("middle pain") - can include pre-ovulation, ovulation, and post-ovulation pain. Mittelschmerz occurs in only about 20 percent of women and:

If you are trying to identify the peak of your fertile window to get pregnant or to avoid pregnancy, mittelschmerz can be a useful fertility sign.

Factors That Can Affect the Onset of Pain

The timing of the onset of mid-cycle pain before ovulation will vary from woman to woman and cycle to cycle. Your pre-ovulation pain might start earlier depending on factors such as:

These factors can also affect the intensity of your pain and how long the mittelschmerz symptoms last.

The Cause of Pre-Ovulation Pain

The pain that comes before you ovulate is likely caused by the growth of your ovarian follicles in which your eggs grow during the first half of your menstrual cycle. As your eggs mature and follicles fill with fluid, your gradually enlarging ovary can cause pressure or pain in your pelvic area. 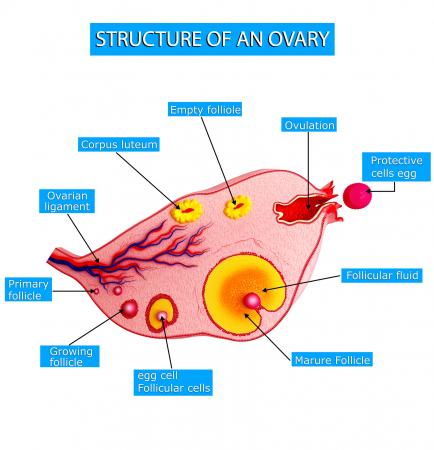 The egg that is destined to ovulate grows faster than the others and can result in increased pain closer to ovulation. Abdominal bloating might also occur with the onset of pain and increase at the time of ovulation.

The rupture of the mature ovarian follicle to release the egg is thought to cause the pelvic pain felt at ovulation. As the egg bursts out of its follicle, the pain can increase and be intense for some women. This peak of your mittelschmerz pain lasts about 20 to 30 minutes according to the Chronic Pelvic Pain in Women reference cited above in the first section.

Pain From Fluid and Blood

Your pain can be more severe if you leak follicle fluid or blood from the ovulation site of your ovary into your pelvic cavity. These fluids can spread and cause pain throughout your pelvic area.

The more fluid that leaks and the greater the bleeding, the more the pain. Bleeding and pain can be severe enough that occasionally surgery is needed to drain the blood and repair the site of ovulation in the affected ovary.

Ovulation pain can be an excellent indicator of fertility but only if you track your cycles closely and are knowledgeable about when you may ovulate. To increase the accuracy of your impending ovulation, you should correlate your ovulation pain with other potential signs of fertility such as:

If you are truly experiencing ovulation pain, which is more of a sharp, sudden pain in the pelvic area (mid or to one side), it can be a good sign of fertility. However, if the pain increases and persists you will need to contact your doctor.

Ovulation Pain and the Possibility of Conception

If you experience ovulation pain in addition to other signs of fertility that can help determine when you are ovulating, there is a good chance that you may conceive. However, once the egg is released, its lifespan is only about 12 to 24 hours. You have a greater chance of conceiving in the days prior to ovulation when the sperm (which can live up to 5 days in a woman's reproductive tract) is already in the fallopian tubes than on the actual day of ovulation.

If you are activity trying for pregnancy, it is important to learn, understand and become aware of your body and the signs and changes that happen when ovulation occurs.

The pain of ovulation usually lasts for one or two days, but you might continue to have some mild symptoms for two more weeks until your next period starts. Expect your symptoms to fade with each day as the activity in your ovary decreases, and any leaked fluid or blood re-absorbs from your pelvic cavity.

Note that crampy pain after ovulation might be contractions of your fallopian tube as your egg or early embryo travels towards your uterus.

Keep Track of Your Pain

If you get recurrent pain at mid-cycle, keep track of when it starts as a sign you are close to ovulation, the peak of your fertile days. While cramping before ovulation, or during or after, is not uncommon, there are times when you may want to seek medical care. Don't hesitate to call your doctor if your pain is moderate to severe, lasts more than two weeks, or is accompanied by other symptoms, such as vaginal bleeding or nausea and vomiting.

12
Comments
© 2006-2021 LoveToKnow, Corp., except where otherwise noted. All Rights Reserved.
Resources, Advice & Tips for Covid-19
Read More
How Long After Ovulation Pain Do You Ovulate?