Can a condom get lost inside a woman? This is a question that concerns many women who use condoms for birth control and to protect against sexually transmitted infections, especially if they have experienced condom slippage during intercourse.

Approximately 2% of condoms will slip off or break during sex. This is not a common occurrence and is typically due to the condom being used incorrectly. Therefore, it is entirely possible for a condom to slip completely off a man's penis during intercourse and be left in the woman's vagina after he withdraws. This can be alarming and, of course, the condom does need to come out as soon as possible. You don't have to be worried that the condom will become permanently stuck, however, because the cervical opening (that is, the opening between your vagina and your uterus) is not large enough for a condom to go through. The condom cannot go any further than the top of your vagina.

In most cases, if the condom is actually stuck, you won't be able to feel it from the inside in the same way you can't always feel a tampon after insertion. However, you may still be able to reach inside your vagina with a few fingers and pull the condom out. If that doesn't work, consider:

Getting Help to Retrieve the Condom

If you cannot get the condom out of your vagina yourself or with the help of your partner, you will need assistance from a health care provider. There are also a number of potential risk factors that may occur for both you and your partner when the condom slips off during intercourse. 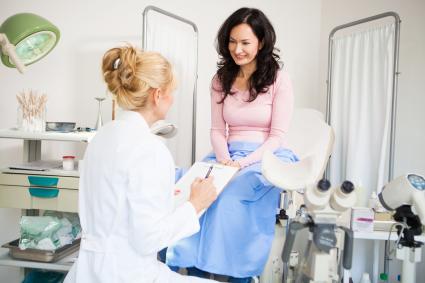 The following are potential risks associated with condom slippage during intercourse:

Most condoms are not biodegradable and will not dissolve or disintegrate inside the vagina.

How Can a Condom Get Lost Inside a Woman?

Because condom slippage does put you at risk for pregnancy and sexually transmitted infections, it's important to understand the causes of condom slippage so you can prevent it from happening again.

The most common causes of condom slippage are:

Avoid Getting a Condom Stuck Inside

If condom slippage happens more than once with the same partner, definitely try a smaller size condom. You might meet with less resistance from your male partner if you purchase the smaller size in a different brand of condom than you have been using.

Finally, sometimes condom slippage happens because the man hesitates to withdraw immediately after ejaculation if his partner hasn't yet reached orgasm. If this is the case, you might want to suggest to your partner than he switch to manual stimulation after he has completely withdrawn his penis.

Don't Give Up on Condoms

If you have experienced a problem with condom slippage, had to ask the question "can a condom get lost inside a woman?" or even needed to make a condom retrieval clinic visit, you might feel embarrassed or even be inclined to stop using condoms. Instead of feeling embarrassed, you should feel proud that you are taking responsibility for your sexual health. Condoms are an excellent way to prevent both pregnancy and sexually transmitted infections and, if they are used correctly, are more than 98 percent effective.